I cussed like a sailor alternating with apologies to the stranger running along side of me.

The smell of gasoline hung heavy in the air and flickers of light were seen from the wreckage. Was it the wreck or was it the truck that turned around as we started across the bridge? Despite the unknown, our legs picked up speed. The closer we got, the smell lessened and the flickers wavered with the sun.

Yet my legs kept carrying me.

They not only carried me, they continued to pick up speed. The silence was deafening. I braced myself as I approached the first vehicle and I knew my call for life would be unanswered.  Nothing could have prepared me to witness a life ended so violently.

Somehow I managed to find my voice again. I knew it would reach the second vehicle before my legs could get me there. Her scream sparked hope. I found her in twisted metal; scared, alone and in agonizing pain. By the grace of God, she was alive and conscious. I managed to reach my hand in between the door and the frame to hold her hand. That was all I could do. Pray like hell. Keep her still, keep her talking and hold her hand.

She couldn't remember her exact age, but she could tell me she was born the same year I graduated from high school. She had a sister and she loved horses. She knew her moms name and rattled off her phone number. She made me promise to call her mom and let her know about the accident. I had a hard time believing this young lady was only 19. She was a stranger, yet I was proud of her spirit and determination, not to mention impressed.

I had no idea how long she would remain conscious. Pertinent info was gathered including medical history, medications and allergies. My focus was split on her and formulating a backup plan as to how we could get into the vehicle if she coded; and not just in the vehicle but how would it be possible to attempt CPR. It would be nearly impossible. What I did know, is that if it was her time, she would not going to die alone.

I have no recollection of sirens even though I knew they were blaring. A new face arrived and told me EMS and fire were crossing the bridge. My girl was still talking. A well choreographed dance surrounded me as crew members efficiently fulfilled their roles. As they cut and pried through the metal,  I continued to hold her hand and help shield her face until it was no longer safe for me to remain at her side.

Keeping my promise, I called her mom after clearing it through a police officer. I have had to make some pretty crappy medical calls before, but this by far topped the list. In turn, I kept a few promises to her mom. At that point, she was surrounded by about 10 medical personel, including Life Star. It was inappropriate for me to approach her, so I asked a supervising crew member to deliver her mom's message of  "I love you". There was no hesitation from him. I stayed until the helicopter left the air. It was the least I could do and a second promise kept. Her mom couldn't be there, but I could.

The cuts from her nails have healed on my hand.  His face and her screams still randomly haunt me. The oil marks remain on the road as a reminder of a head-on tragedy. Four kids lost their dad and a wife lost her husband in an instant. A young girl is recovering from critical injuries and the question of 'why' will most likely go unanswered. No one is immune to tragedy. Never waste an opportunity to say 'I love you' or hold your kids a little tighter. Each of us means something to someone.

'Are you going to have any more kids?'

What do you care. You have never gave a shit about what happened in my life. Why now. It has been a year since you talked to me last and this is the first and only question you ask? I will answer that question when you fight for the kids you gave up because they didn't fit in your 'new' life ~ your words not mine.

I often wonder if my personal hell over the last seven months is a direct result of this inner dialog. My own little purgatory. I let the bitterness in and allowed it to run rampant in my life once again. I sat back and allowed my inner light to be extinguished. It was easier to shut the world out than look it directly in the eye. It is my own doing and only I can take responsibility for it.

Another day in your long week.  A lonely, empty mark of 40 weeks for me.

I never imagined this thing called the 'internet' would open my world  to some pretty amazing and remarkable parents! When I started this journey nearly two years ago, I clung to what I could remember of my faith... hoping and praying to make it from one day to the next, never knowing what the next moment would bring... or not bring. I clung to the fact that my faith always circled back to love. I knew the basics, but never could produce a bible passage to cultivate what I knew.

So with that said, lets go back to the pretty amazing parent comment.  One mom in particular I developed a special bond with. We navigated our paths together and more than once, her words on faith and love helped me back up when I stumbled. She could always provide that tangible verse to reaffirm and strengthen my faith when I needed it the most. We were two moms walking similar paths from different denominations, yet brought together by love on so many levels.

I am so happy (and proud) to announce that her book, Love Isn't Selfish, can now be found in paperback and for Kindle. Follow this link to learn more about her book and for ordering details. This would make a great stocking stuffer for a few Kindles out there :) 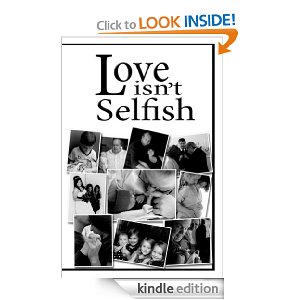 Posted by Unknown at 2:09 PM No comments:

~ He graced us with 55 minutes before making his way to Heaven. Black hair and dark eyes. Long fingers and toes with strong legs. Tiny mouth, full lips and chubby cheeks. But most importantly a strong, willful heart. He was perfect in every way ~